Style FlyersBlogHow to install a font

How to install a font

How to install a font under Windows?

Extract the files you have downloaded. Details: Click on the “Download” button, save the zip somewhere on your hard disk, go to the place where it is saved, double-click on the zip to open it, then either click on “Extract all files” or drag and drop the files elsewhere from the zip window (hold down the CTRL key to select several files at once) For the 20th century versions of Windows you must install an unzip tool first.

There are some videos on YouTube if that helps.

Tip (for Windows XP/Vista, not Windows 7/8): if you occasionally need a font, you don’t need to install it. Just double-click on the .ttf file, and while the preview window is opened you can use it in most of the programs you’ll launch (apart from a few exceptions like OpenOffice).

How to install a font under Mac OS?

Mac OS X recognizes TrueType and OpenType fonts (.ttf and .otf) but not the PC bitmap fonts (.fon). Files are compressed, you may need an utility like Stuffit Expander.

How to install a font under Linux?

Copy the font files (.ttf or .otf) to fonts:// in the File manager. Or: Go into the /home folder, in the menu select View > Show Hidden Files, you will see the hidden folder .fonts (if not, create it) then copy the font files there. Or: (under some Linux versions – Ubuntu for example) Double-click the font file > “Install font” button in the preview window. 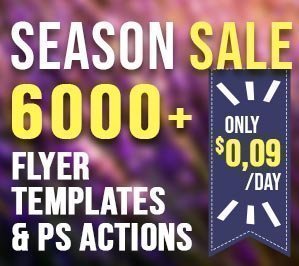 To use these flyer template
you need Adobe Photoshop

Please fill this form. In field Your message please write what unique design you are intersting in and we will send you brief for this design!